A Person’s A Person No Matter How Small….And We All Mean Something 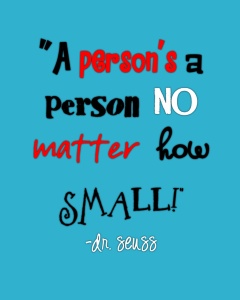 After rereading yesterday’s post I don’t want anyone to get the impression that I blame my wife for our current circumstances.  I don’t, not one bit.  While we had problems with our marriage they were two-sided and most of the problems we had were not conscious.  We did not consciously destroy each other’s self-esteem. However, my decision to have an affair that was a conscious decision.  I had to make that decision and live with the repercussions of that decision.  And I regret it everyday.

I want to stay with my wife.  I really do and as I read all these blogs she seems to be taking this much better than other people.  While she did have an angry period, it was short.  She has asked for some details and I always provide what she wants.  I don’t/can’t hide anymore.  Then she told me one day that this had nothing to do with her and it was all on me and if I want to make our marriage work then we can do it.  We have been amazing since then.  She has made me feel wanted and I have also done the same for her.  I drop by her work just to say “Hi” or see if she wants to go to lunch, not because I feel I have to make it up to her, but because I want to be there with her.

I also should point out that the entire time I was having the affair she was working on herself.  Trying to get herself where she wanted to be, she lost a lot of weight.  She found something she likes to do (boxing, who knew) and is taking more time for herself which I have always supported.  I am so proud of what she has accomplished and it only adds to the guilt that instead of cheering her on I was lost in another world.  And while she is almost where she wants to be both physically and mentally I was not there to help her celebrate her success.

She worries endlessly about me and me dealing with this which makes me feel even more guilty.  She should not have to worry about me because I am the one who hurt her, hurt us.  So as much as I try I cannot move past all that I have done.  I am really at a loss of what to do.  I think I am waiting for a magical light to flick and it will all be better in my head, but I know that is a pipe dream.  No, the only thing in my head is guilt, shame, thoughts of my wife, and thought of the other woman (OW).

The OW has really been on my thought recently.  She was not in the best spot when our affair was finally discovered and I came clean and agreed to end everything.  She was struggling financially, had issues with her kids from her first marriage and problems with her second ex-husband (I know, all the exes should have been a red flag but that is a story for another day).  Then she ended up in the hospital and has no health insurance.  She stayed 3 days and then was out of work for another week on bed rest.  During all this she wanted me to be by her side and I did not even contact her once.  It was hard.  I really did feel like I should be by her side, partly because she has no one else and partly because I felt I belonged there.  It was hard, really hard but I made it through.

Instead I stayed here by my wife’s side and we tried to piece things together here.  Just writing all this right now makes me want to throw up.  As hard as I try I cannot get thoughts of her out of my head.  I wonder what she is doing, has she moved on? Is she as miserable as I am at times or was I a fleeting thought.  She told me she never felt like this about anyone before in her life and I can honestly say the same thing, but she has much more experience.  Then again does anyone ever feel the same about any two people.  I have only my wife and marriage to use as a reference point.  It all just makes my head spin, that and all the alcohol I have had tonight.  It helped me make it through the night.  So the big question of the day is “How do I get her out of my head?  Or is she there because I should be there instead of here?”  These questions will haunt me for a long time.

I know people can say just live in the present and then you won’t think about her.  Just focus on now and today.  How do you do that when you are reminded about her and your actions every time you turn around?  It makes me want to scream…  There are so many things that are reminders of her.  I will not be able to get rid of them all.  My wife does not know about this internal battle I am having on a daily basis.  I know I should tell her but she is doing so well I don’t want to bring her down again.  Seeing how I hurt her almost killed me and I don’t/won’t do anything like that again.

We are all people and all have wants and needs no matter what has gone on in our past, is going on in the present, or will happen in the future.  So no matter how big or small we are all similar, just different needs and desires.  I just wish I knew where I stood in all this.

I sent my wife a text yesterday when I was a few hours away and said “I did something stupid.”.  I did not think that she would immediately jump to the worst conclusion, but I should have and never sent that text.  It was actually about something I ate and had nothing to do with any of our relationship issues but it was just another reminder of the problems I caused and how much I have changed her.  She told me it made her jump later that night and I felt horrible.  I don’t need to be adding to any of her possible triggers.

I am about to head to bed and talk with her a little and then hopefully fall blissfully asleep with my arms around her.  None of this had to do with my story but that will have to wait for tomorrow.

A Person’s A Person No Matter How Small – Dr Seuss

I am just a run of the mill, ever day father/husband who is just trying to navigate my way back to where I want to be. Unfortunately there isn't an "Easy" button or a "Reset" button or I would be hitting them repeatedly. This is just my journey from my perspective.
View all posts by bac4sccr →
This entry was posted in Coffee Affair, March 2015 and tagged Adultery, Affair, Affair Recovery, betrayed spouses, blogging, cheater, cheaters, cheating, cheating husband, cheating spouses, healing, healing after affair, infidelity, marriage, other woman, relationships. Bookmark the permalink.

3 Responses to A Person’s A Person No Matter How Small….And We All Mean Something

This site uses Akismet to reduce spam. Learn how your comment data is processed.